The sixth planet was ten times larger than the last one. It was inhabited by an old gentleman who wrote voluminous books. 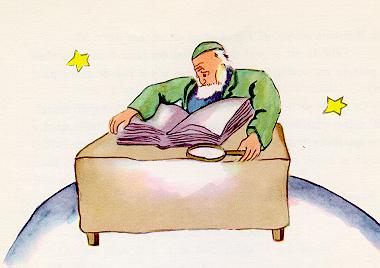 "Oh, look! Here is an explorer!" he exclaimed to himself when he saw the little prince coming.

The little prince sat down on the table and panted a little. He had already traveled so much and so far!

"Where do you come from?" the old gentleman said to him.

"What is that big book?" said the little prince. "What are you doing?"

"I am a geographer," the old gentleman said to him.

"What is a geographer?" asked the little prince.

"A geographer is a scholar who knows the location of all the seas, rivers, towns, mountains, and deserts."

"That is very interesting," said the little prince. "Here at last is a man who has a real profession!" And he cast a look around him at the planet of the geographer. It was the most magnificent and stately planet that he had ever seen.

"Your planet is very beautiful," he said. "Has it any oceans?"

"I couldn't tell you," said the geographer.

"Ah!" The little prince was disappointed. "Has it any mountains?"

"I couldn't tell you," said the geographer.

"And towns, and rivers, and deserts?"

"I couldn't tell you that, either."

"But you are a geographer!"

"Exactly," the geographer said. "But I am not an explorer. I haven't a single explorer on my planet. It is not the geographer who goes out to count the towns, the rivers, the mountains, the seas, the oceans, and the deserts. The geographer is much too important to go loafing about. He does not leave his desk. But he receives the explorers in his study. He asks them questions, and he notes down what they recall of their travels. And if the recollections of any one among them seem interesting to him, the geographer orders an inquiry into that explorer's moral character."

"Why is that?" asked the little prince.

"Because intoxicated men see double. Then the geographer would note down two mountains in a place where there was only one."

"I know some one," said the little prince, "who would make a bad explorer."

"That is possible. Then, when the moral character of the explorer is shown to be good, an inquiry is ordered into his discovery."

"No. That would be too complicated. But one requires the explorer to furnish proofs. For example, if the discovery in question is that of a large mountain, one requires that large stones be brought back from it."

The geographer was suddenly stirred to excitement.

"But you-- you come from far away! You are an explorer! You shall describe your planet to me!"

And, having opened his big register, the geographer sharpened his pencil. The recitals of explorers are put down first in pencil. One waits until the explorer has furnished proofs, before putting them down in ink.

"Oh, where I live," said the little prince, "it is not very interesting. It is all so small. I have three volcanoes. Two volcanoes are active and the other is extinct. But one never knows."

"One never knows," said the geographer.

"We do not record flowers," said the geographer.

"Why is that? The flower is the most beautiful thing on my planet!"

"We do not record them," said the geographer, "because they are ephemeral."

"But extinct volcanoes may come to life again," the little prince interrupted. "What does that mean-- 'ephemeral'?"

"Whether volcanoes are extinct or alive, it comes to the same thing for us," said the geographer. "The thing that matters to us is the mountain. It does not change."

"But what does that mean-- 'ephemeral'?" repeated the little prince, who never in his life had let go of a question, once he had asked it.

"It means, 'which is in danger of speedy disappearance.'"

"Is my flower in danger of speedy disappearance?"

"My flower is ephemeral," the little prince said to himself, "and she has only four thorns to defend herself against the world. And I have left her on my planet, all alone!"

That was his first moment of regret. But he took courage once more.

"What place would you advise me to visit now?" he asked.

"The planet Earth," replied the geographer. "It has a good reputation."

And the little prince went away, thinking of his flower.