"Men," said the little prince, "set out on their way in express trains, but they do not know what they are looking for. Then they rush about, and get excited, and turn round and round…"

"It is not worth the trouble…"

"It is strange," I said to the little prince. "Everything is ready for use: the pulley, the bucket, the rope…"

He laughed, touched the rope, and set the pulley to working. And the pulley moaned, like an old weathervane which the wind has long since forgotten. 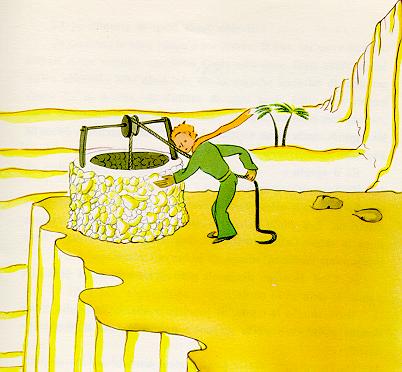 "Do you hear?" said the little prince. "We have wakened the well, and it is singing…"

I did not want him to tire himself with the rope.

I hoisted the bucket slowly to the edge of the well and set it there-- happy, tired as I was, over my achievement. The song of the pulley was still in my ears, and I could see the sunlight shimmer in the still trembling water.

"I am thirsty for this water," said the little prince. "Give me some of it to drink…"

And I understood what he had been looking for.

I raised the bucket to his lips. He drank, his eyes closed. It was as sweet as some special festival treat. This water was indeed a different thing from ordinary nourishment. Its sweetness was born of the walk under the stars, the song of the pulley, the effort of my arms. It was good for the heart, like a present. When I was a little boy, the lights of the Christmas tree, the music of the Midnight Mass, the tenderness of smiling faces, used to make up, so, the radiance of the gifts I received.

"The men where you live," said the little prince, "raise five thousand roses in the same garden-- and they do not find in it what they are looking for."

"And yet what they are looking for could be found in one single rose, or in a little water."

And the little prince added:

"But the eyes are blind. One must look with the heart…"

I had drunk the water. I breathed easily. At sunrise the sand is the color of honey. And that honey color was making me happy, too. What brought me, then, this sense of grief?

"You must keep your promise," said the little prince, softly, as he sat down beside me once more.

I took my rough drafts of drawings out of my pocket. The little prince looked them over, and laughed as he said:

I had been so proud of my baobabs!

"Your fox-- his ears look a little like horns; and they are too long."

"Oh, that will be all right," he said, "children understand."

So then I made a pencil sketch of a muzzle. And as I gave it to him my heart was torn.

"You have plans that I do not know about," I said.

But he did not answer me. He said to me, instead:

"You know-- my descent to the earth… Tomorrow will be its anniversary."

Then, after a silence, he went on:

"I came down very near here."

And once again, without understanding why, I had a queer sense of sorrow. One question, however, occurred to me:

"Then it was not by chance that on the morning when I first met you-- a week ago-- you were strolling along like that, all alone, a thousand miles from any inhabited region? You were on the your back to the place where you landed?"

And I added, with some hesitancy:

"Perhaps it was because of the anniversary?"

The little prince flushed once more. He never answered questions-- but when one flushes does that not mean "Yes"?

But he interrupted me.

"Now you must work. You must return to your engine. I will be waiting for you here. Come back tomorrow evening…"

But I was not reassured. I remembered the fox. One runs the risk of weeping a little, if one lets himself be tamed…