It took me a long time to learn where he came from. The little prince, who asked me so many questions, never seemed to hear the ones I asked him. It was from words dropped by chance that, little by little, everything was revealed to me.

The first time he saw my airplane, for instance (I shall not draw my airplane; that would be much too complicated for me), he asked me:

"What is that object?"

"That is not an object. It flies. It is an airplane. It is my airplane."

And I was proud to have him learn that I could fly.

He cried out, then:

"What! You dropped down from the sky?"

And the little prince broke into a lovely peal of laughter, which irritated me very much. I like my misfortunes to be taken seriously.Then he added:

"So you, too, come from the sky! Which is your planet?"

At that moment I caught a gleam of light in the impenetrable mystery of his presence; and I demanded, abruptly:

"Do you come from another planet?"

But he did not reply. He tossed his head gently, without taking his eyes from my plane:

And he sank into a reverie, which lasted a long time. Then, taking my sheep out of his pocket, he buried himself in the contemplation of his treasure.

You can imagine how my curiosity was aroused by this half-confidence about the "other planets." I made a great effort, therefore, to find out more on this subject.

"My little man, where do you come from? What is this 'where I live,' of which you speak? Where do you want to take your sheep?" 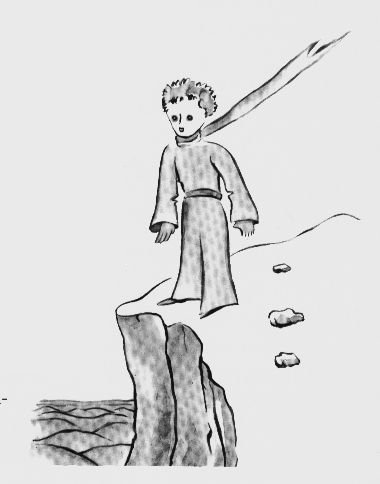 After a reflective silence he answered:

"The thing that is so good about the box you have given me is that at night he can use it as his house."

"That is so. And if you are good I will give you a string, too, so that you can tie him during the day, and a post to tie him to."

But the little prince seemed shocked by this offer:

"But if you don't tie him," I said, "he will wander off somewhere, and get lost."

My friend broke into another peal of laughter:

"But where do you think he would go?"

"Anywhere. Straight ahead of him."

Then the little prince said, earnestly:

"That doesn't matter. Where I live, everything is so small!"

And, with perhaps a hint of sadness, he added:

"Straight ahead of him, nobody can go very far…"